Going to a Concert Alone on Valentine’s Day

“Are you really going to the concert alone on Valentine’s day?? Hahahahaha.” I asked myself a couple of times before buying my ticket online. It seemed like a crazy idea because I felt that it would be very awkward for me to sit beside thousands of couples celebrating Valentine’s day at the concert of Boyce Avenue. During that time, I could already imagine Alejandro Manzano dedicating a song to all of the lovers in the coliseum while I would just sit there and be reminded me of alone-ness and singleness. Haha. It was a funny thought, really. But somehow, it still didn’t stop me from buying one ticket.

I didn’t have close friends who also wanted to watch the concert and my family members already had plans that Valentine weekend, so I figured that watching the concert alone was really meant for me. A few weeks before the concert, I told God: “Okay, Lord. It’ll be just You and me on Valentine’s day. Even though I feel that it would probably be a bit awkward and lonely for me at the concert, I know that You will always be with me and that’s all that matters. I can’t wait for our date!”

When Valentine’s day came, I was nervous and excited at the same time because I was finally going to Boyce Avenue’s concert. All I wanted to do was to relax, get ready for the concert, listen to their songs, prepare my phone and camera, and try to look for ways to meet the band after the show (since they weren’t selling meet and greet passes). However, God encouraged me not to worry about these things and He helped me find rest in Him that day. Instead of worrying about the meet and greet dilemma, He gave me the desire to spend time with Him in the morning and He allowed me to have the privilege of studying His Word and having accountability with Arra (a friend I’ve been mentoring) in the afternoon.

The first half of my Valentine’s day was very encouraging for me because God used those hours to remind me of my security in Him. The idea of being alone on Valentine’s day may sound sad and funny, but by God’s grace, He gave me the strength that day to focus on who He is and who I am in Him instead of dwelling on the things that I didn’t have. Actually, He has been giving me the strength to do so ever since, but it was only until a couple of years ago that I truly embraced it in my heart.

Being in a committed relationship is a privilege and responsibility that God graciously gives to people and He may or may not allow me to experience such in the future. But whether or not He does, I am encouraged to continue seeking the Lord with all my heart and to serve Him faithfully.  This is exactly what God was telling me to do last February 14, 2015. Even if I was going to be alone at the concert of Boyce Avenue, even if I was going to be surrounded by thousands of couples, and even if I didn’t have the assurance of meeting the band after the show, He encouraged me to still be faithful in spending time with Him and serving Him that morning and afternoon. 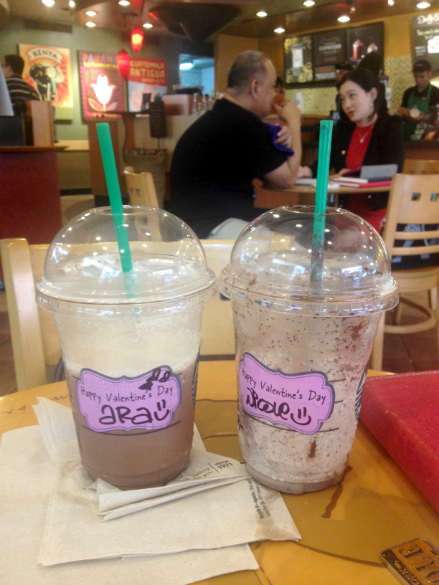 “You make my heart beat steady to the love song You’ve written for me. I don’t want anything but You, You’re all that I need.” –Royal Tailor’s “Love Song”

Fast forward to 6:45pm that Valentine’s night, I was already seated inside the Smart Araneta Coliseum. I was an hour and fifteen minutes early, so I had the chance to settle down and observe my surroundings. True enough, there were couples everywhere! Hahaha. They were all paired up with buckets of popcorn, pizza slices, and drinks in their hands. I have to admit that at first, walking into the coliseum and sitting by myself felt a bit weird and funny. But, as the minutes passed by, more and more people filled the place and it didn’t really matter if I was alone or with a partner or with my whole family. We were all there to watch our favorite band perform and enjoy their beautiful music!

While waiting for the concert to start, I did something that I rarely do. I wore my reading glasses. I never really liked wearing my glasses because I felt that it didn’t suit me since I also wore braces before. Eventually, I disregarded my glasses for two years. It was only until a couple of months ago that I saw them again while I was cleaning my room. Somehow, I felt that I would need them during the concert because I wasn’t sure if my seat was near enough for me to see the band members’ faces. Thankfully, I brought them with me and I ended up wearing my eyeglasses during the concert which helped me see things clearly.

While the band was playing, I would slightly move my glasses up and down to compare what I see with and without them. It was during this time that God spoke to my heart and encouraged me to look at the situation I’m in through His eyes. Looking through my eyeglasses made a huge difference that night because not only was I able to see the band clearly, I was also able to see my dad’s friend (who helped me in meeting the band after the show) while he was more than 50 meters away from me.

In the same way, God reminded me of the huge difference it makes when I choose to look at myself or at my circumstances through His eyes. I was alone at the concert on Valentine’s day, but I had so many things to be grateful for too. Because I was alone that day, I was able to experience the ff.:

1. Focused on the music and the band. – Because I didn’t have anyone to talk to, I had the privilege of really listening to the music, singing along, and observing the band while they played and sing. I noticed little things that happened on stage, like how Alejandro tiptoes while he sings or how Fabian strums his guitar while he raises it high in the air or how Daniel smoothly goes on top of the bass drum while he bobs his head and plays his guitar. I also appreciated how the Manzano brothers interacted with each other (by smiling or making fierce facial expressions) while playing their guitars. Moreover, it was cool to see their crew discreetly and quickly change the guitars lined up at both sides of the stage which helped the band get the right guitars on time.

2. Stepped out of my comfort zone. It was my first time to drive to Smart Araneta Coliseum and I honestly wasn’t sure which roads or turns I should take. My dad helped me by giving instructions and I did check Google Maps, but once I was on the road by myself, it was pretty intimidating. But by God’s grace, I safely and smoothly got to the venue. Woohoo! Oh, and there were numerous times during the event when I needed to leave my shy self behind and muster up courage so I could talk to certain people (bouncer friend, dad’s friend, etc.).

3. Learned to listen more. Because I wasn’t speaking much that night, I literally listened more. It helped me understand what was going in my heart and helped me listen to God’s voice more.

4. Had the Luxury of Time. I had the privilege of leaving the house and leaving the concert anytime I wanted to. I also walked at my own pace and didn’t need to rush or slow down while I was on my way to the venue.

5. Free to be Me. My introverted self actually enjoyed my alone time. Although I did feel awkward at first, being alone eventually helped me feel more confident after a while. In fact, a man beside me was also alone, but he didn’t care too. He also got his phone, recorded the band throughout the show, and enjoyed listening to the songs just like the rest of the crowd.

THE BEST VALENTINE’S DAY EVER

Before going to the concert, I already expected the band to say something about the lovers out there. But, surprisingly, they gave a shoutout to all the singles at the concert instead. Hahaha. The band even dedicated their song “On My Way” to all of the single men and women and encouraged us not to settle for anyone who’s less than the best for us.

Even if I was alone, I didn’t feel lonely on Valentine’s day because I felt God’s presence with me. He also helped me appreciate so many things around me. E.g. I had two hands which were very helpful in taking photos and videos at the same time using the gadgets that I had. I had everything I needed that day: transportation, access to water and food, extra cash, a really good seat, eyeglasses, etc. I had the privilege of enjoying the concert of Boyce Avenue, meeting them after the show, and sharing God’s love to the band on Valentine’s day through John 3:16! (Aaaahhhh!!!) But most importantly, I had the honor of enjoying a crazy, amazing, faith-stretching date night with God and experiencing Him in a much deeper way this time.

Just so you know, I ended up crying while I was on my way home from the concert. I couldn’t explain or contain the joy and awe in me after my Valentine’s day experience because I saw how God graciously allowed things to fall into place. He definitely knows our hearts’ desires more than we do.

“’You could have been anywhere else,’ Alejandro Manzano said, ‘but you chose to be here.’” :)

I do enjoy spending time with family and friends, but every now and then, it’s nice to do something new and spend some quality time alone. Going to Boyce Avenue’s concert alone on Valentine’s day was a blessing after all. In fact, for me, it was certainly the best Valentine’s day ever!

“Do not be anxious about anything, but in everything, by prayer and petition, with thanksgiving, present your requests to God. And the peace of God, which transcends all understanding, will guard your hearts and your minds in Christ Jesus.” –Philippians 4:6-7