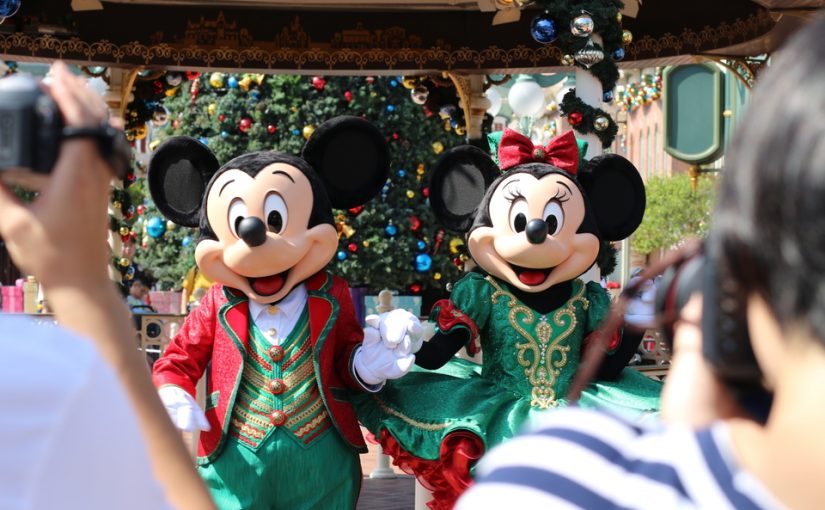 After more than two decades, I finally had the opportunity to re-visit my childhood memories and see them in real life. Haha! Yes, I know they’re all actors, but, seeing familiar characters and scenes from the cartoons we used to watch as kids made my eyes brighten up. If you’re a fan of Disney, I suggest that you go to any Disneyland park at least once in your life. But for those who aren’t fans yet, maybe this post can help you appreciate it more and consider visiting too! I’ll be sharing twelve things that you can expect when you visit Hong Kong Disneyland. Enjoy! 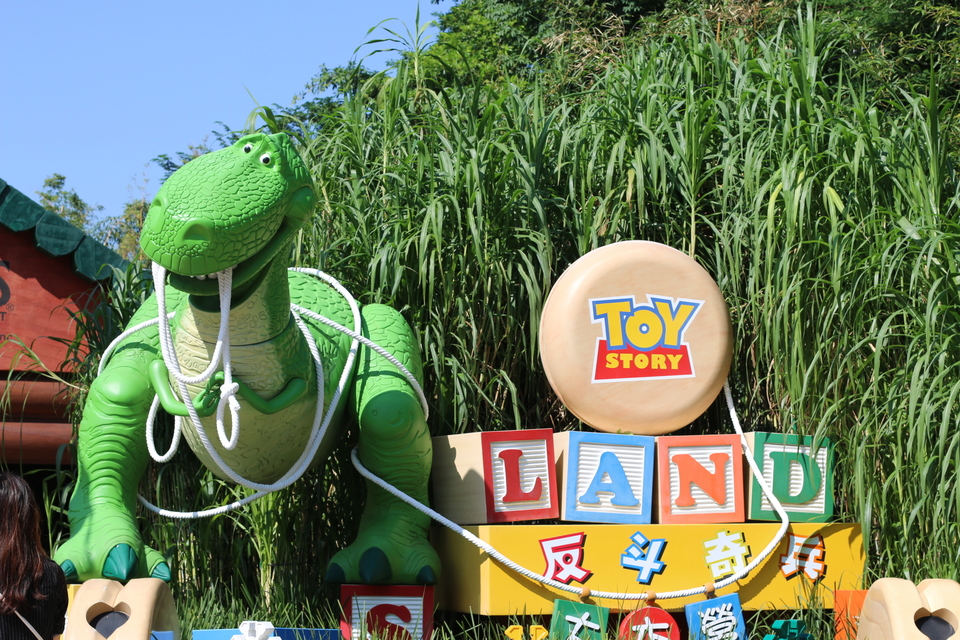 You would be delighted to know that the park has free Wi-Fi in almost all of the areas. I noticed that the signal was a bit low inside enclosed areas (e.g. Indoor rollercoaster rides, theatres, etc.), but in general, I was very pleased with the availability and connection. This was also helpful for us because the pocket Wi-Fi that we rented at the airport wasn’t excellent at all. So, for tourists like us who don’t have local numbers in Hong Kong, getting lost in the park won’t be such a hassle because you can connect to their Wi-Fi and easily communicate with your family or friends online. 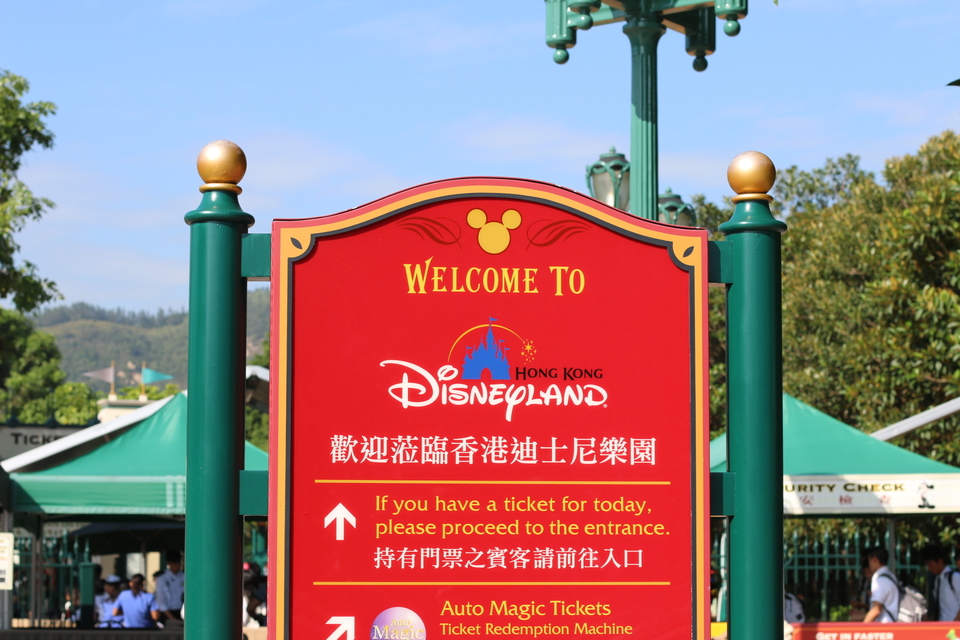 Planning what to eat for a day tour in Disneyland is quite confusing. You don’t want to overindulge during breakfast because you know you’ll be going on rides at the park. But, you also don’t want to starve. Unfortunately, you can’t bring food from outside. So, if you get hungry in the middle of the day, you have no choice but to buy from their stalls and restaurants along Main Street. I promised myself that I wouldn’t spend a lot on food inside the park because I knew that it would be very expensive. So, throughout the whole day, I only got myself a Mickey Mouse waffle and a sausage roll from Maxim’s cakes. 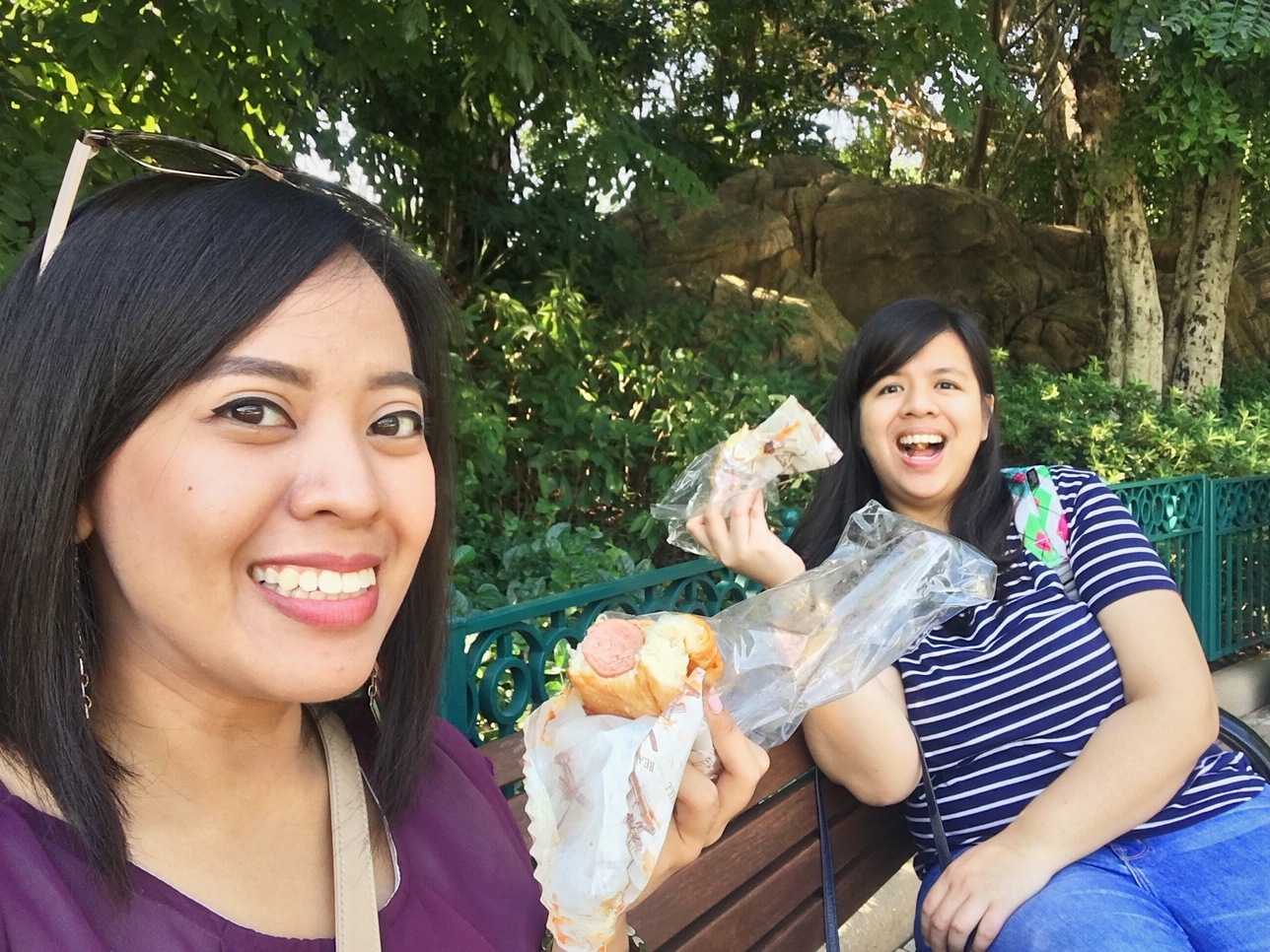 There were times when I craved for fruit shakes because of the hot weather. However, they only had a limited variety of products. Bottled water, soft drinks in cans, bottled fruit juices, diced fruits in a cup, salty popcorn, caramel popcorn, Disney-themed ice cream popsicles, and squid were sold at the kiosks in every section of the park. They were, again, more expensive than usual. More than what I’m willing to pay for. Haha. So, I just settled with buying their cold bottle of water since it was the best option. 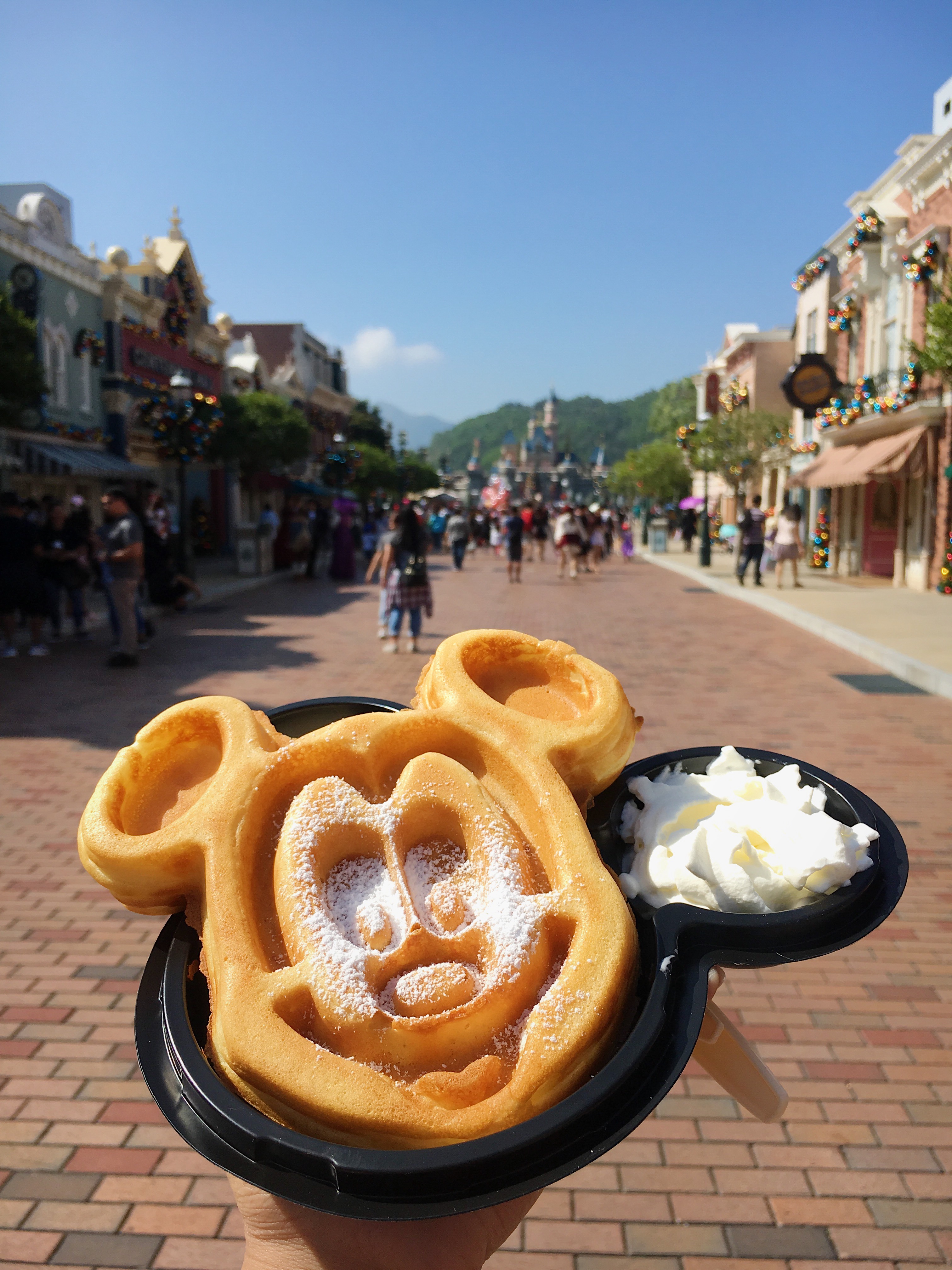 I’m not sure if there are other drinking fountains at the park, but I did notice one near the theater where The Lion King show was, just beside the restrooms. A bottle of cold water inside the park will cost you around HKD 30 (PHP 200). If you’re okay with drinking lukewarm water, you can refill your bottles at this fountain. 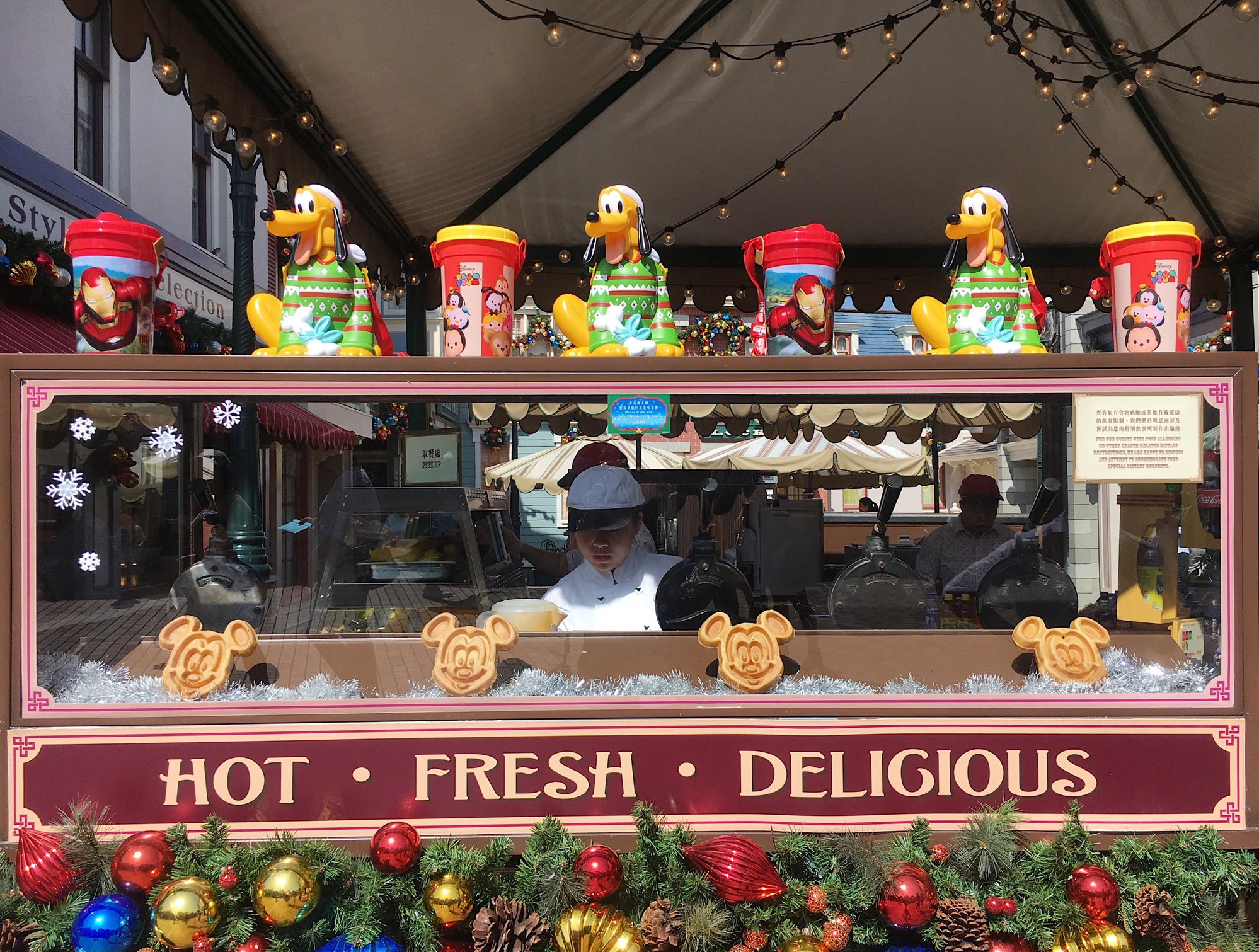 “Flights of Fantasy Parade” (3:00 pm) and “Disney Paint the Night Nighttime Spectacular” (7:30 pm) are must-see attractions in Disneyland! The characters parade through Main Street while they dance to the upbeat background music playing. Some characters even invite some of the kids to join them in dancing for a few seconds. I can’t really tell which one’s better, but I enjoyed watching both! 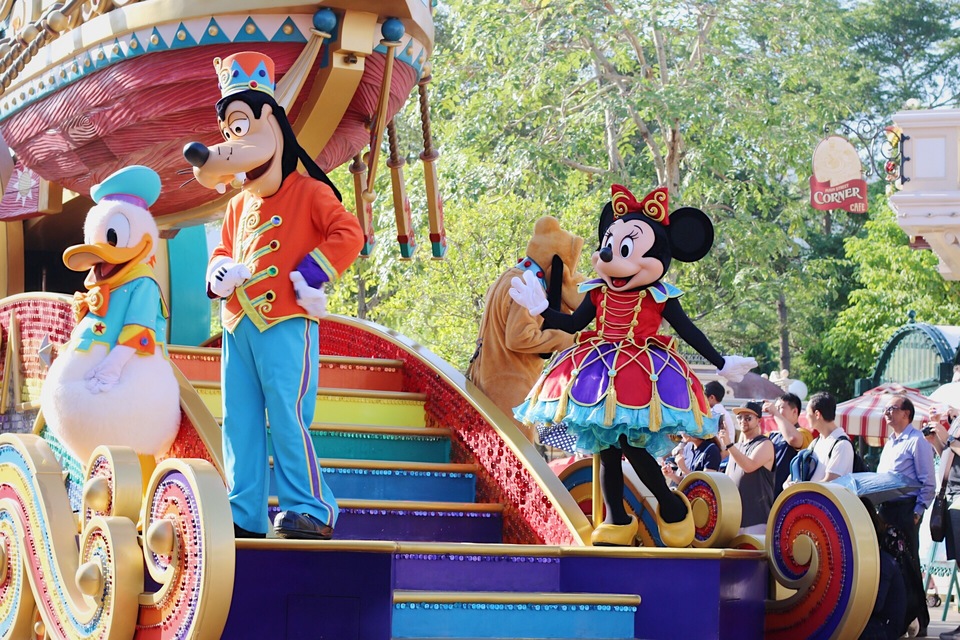 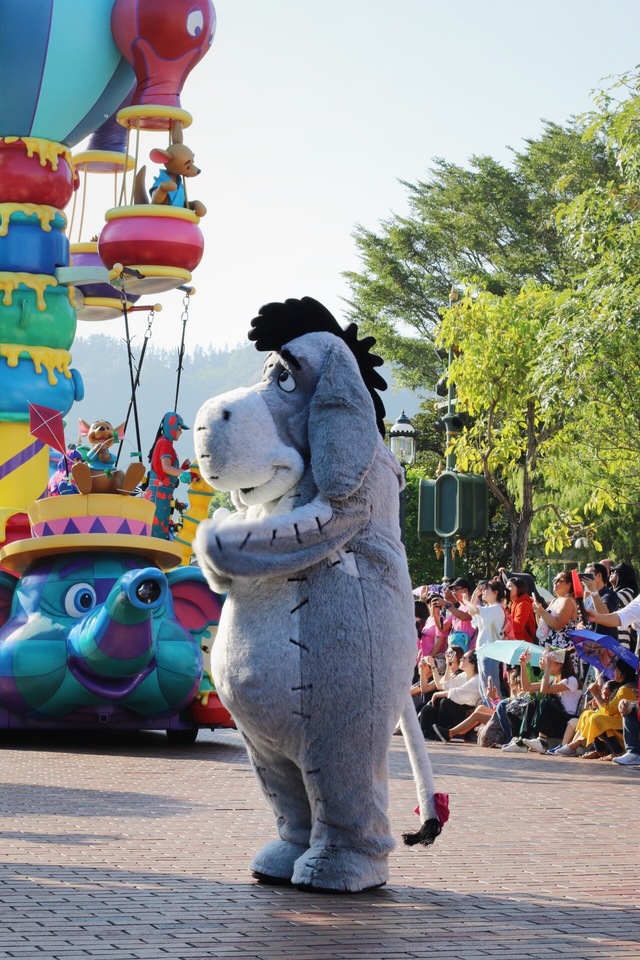 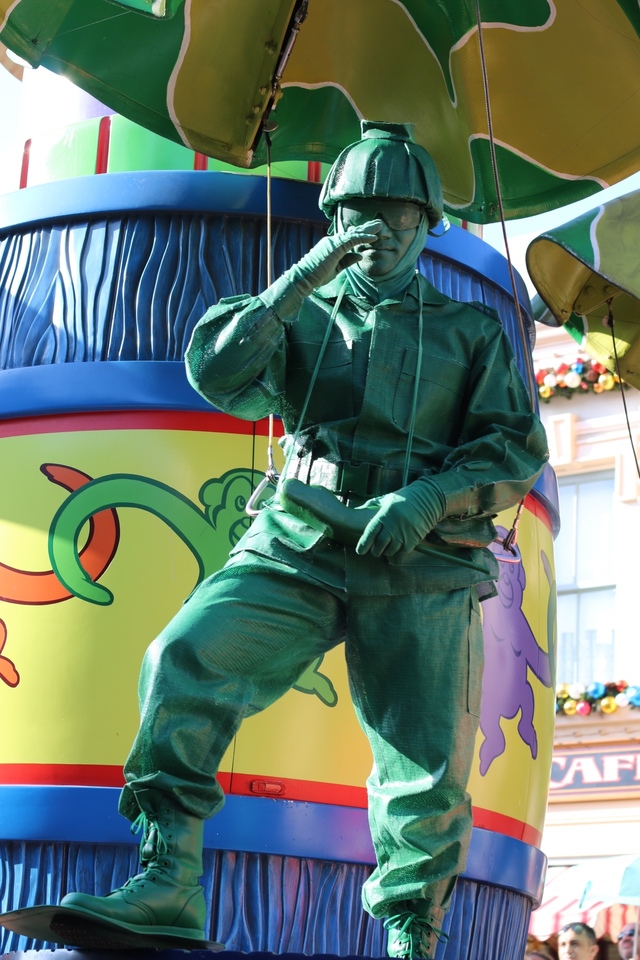 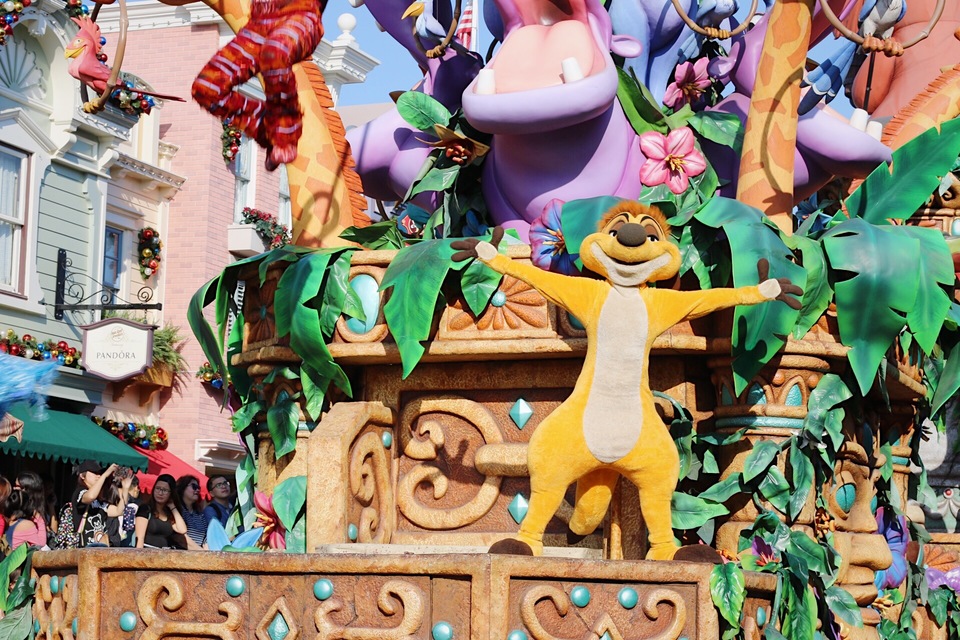 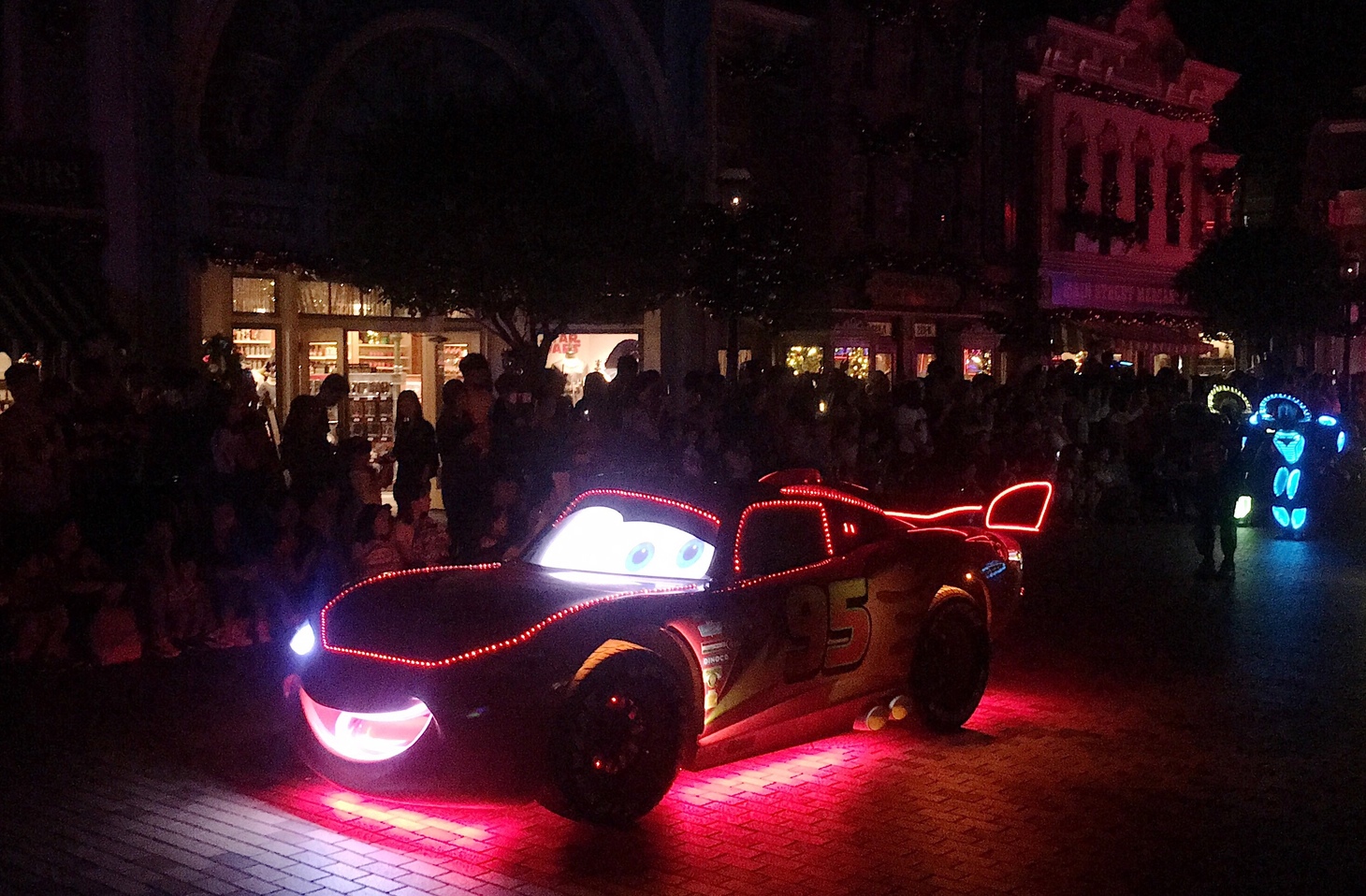 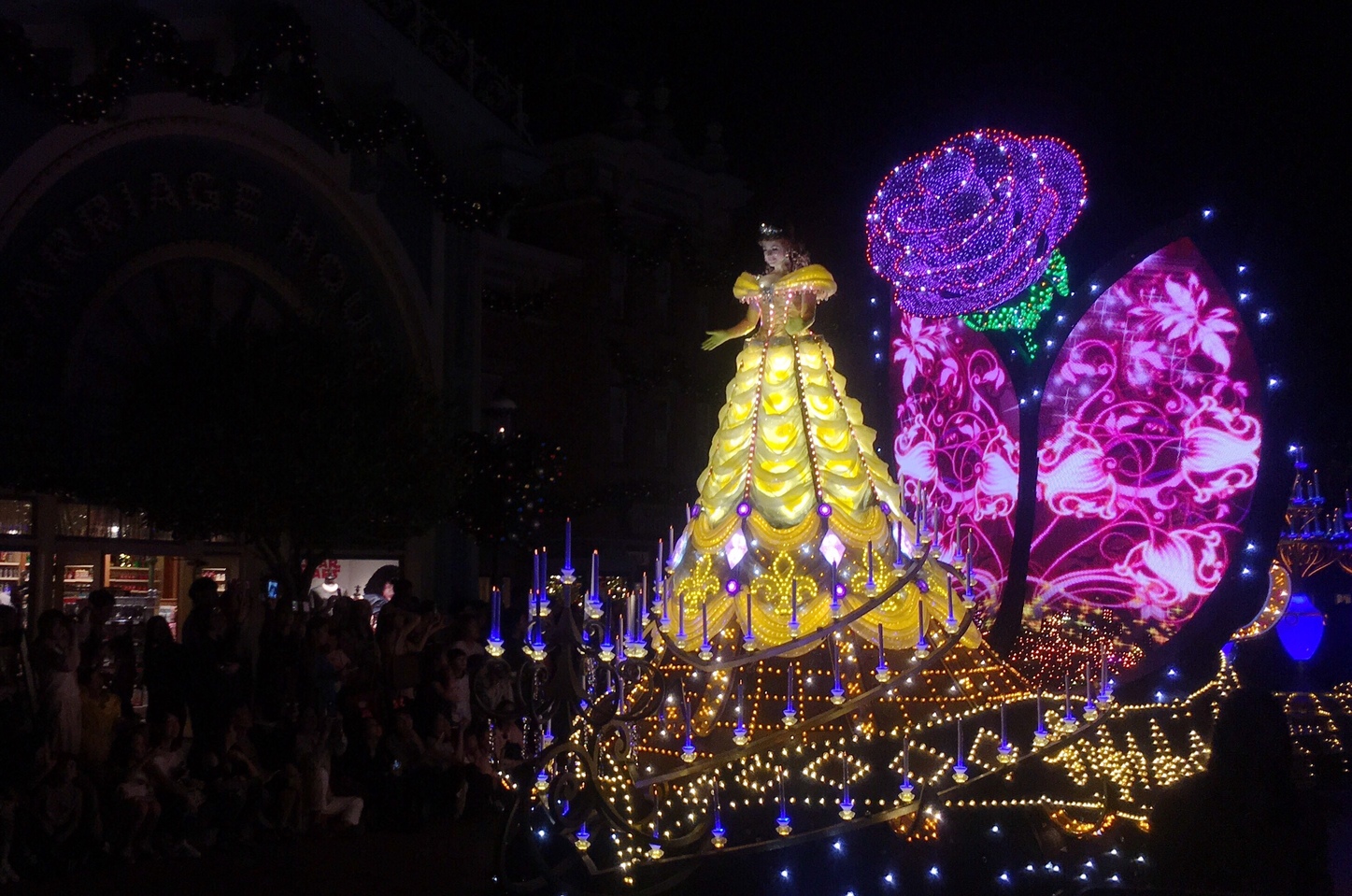 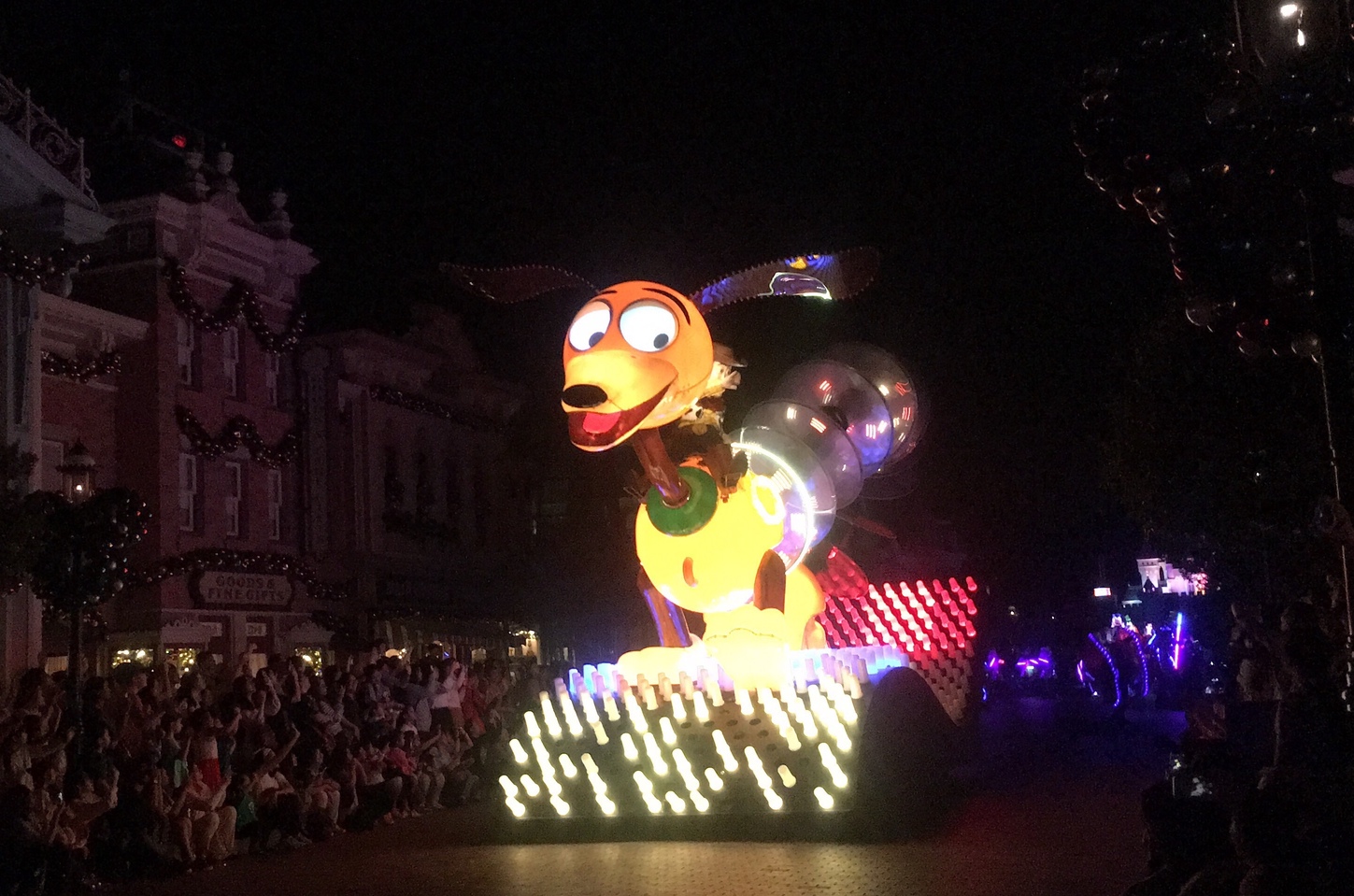 My favorite attraction was The Lion King show. It felt like I was watching a broadway musical. I loved it! The choreography, harmonies, acrobats and dancers gliding through the area! Another attraction that I enjoyed was the Mystic Manor. You’ll be seated inside an electric carriage that takes you through eight galleries with animated antiques. This attraction also incorporates cool gushes of wind, mist, cinematic sounds and lights! It was amazing and surprisingly refreshing on a hot day. One of the things that I loved about these two was that we were allowed to capture the moments on video (without flash, of course). Make sure to visit these when you go! For more details on the other attractions, you can check their website. 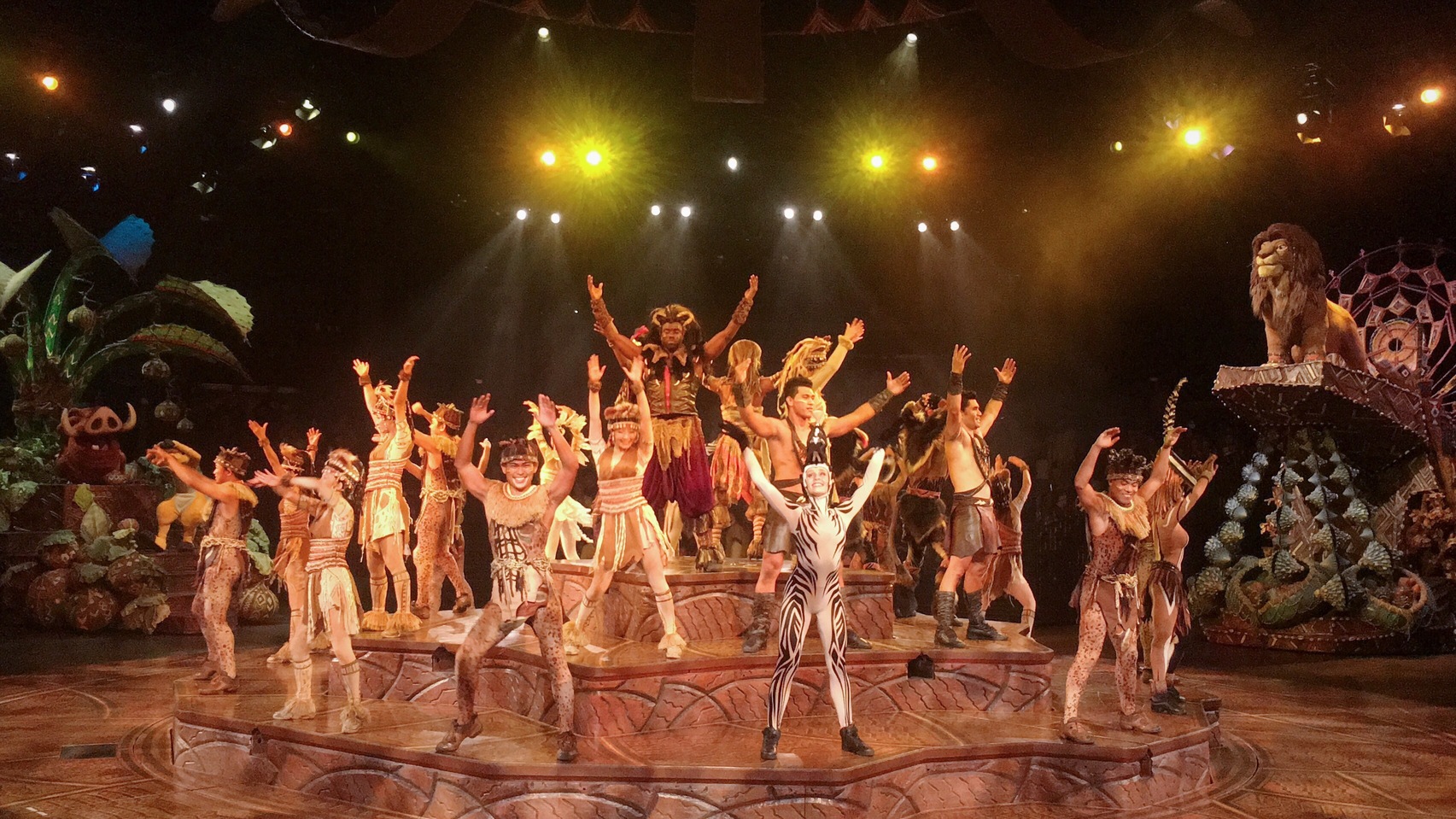 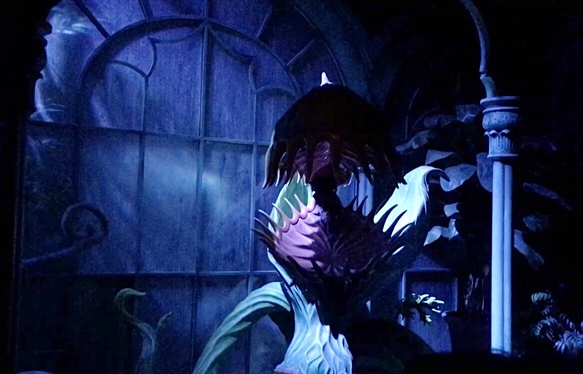 There are a few rollercoaster rides. But, there are a lot more relaxing kiddie rides throughout the park. We didn’t line up for these anymore because of the long queues. But, we did manage to ride the ff.: Hyperspace Mountain’s indoor rollercoaster, Iron Man Experience, Big Grizzly Mountain outdoor rollercoaster, and Slinky Dog Spin. 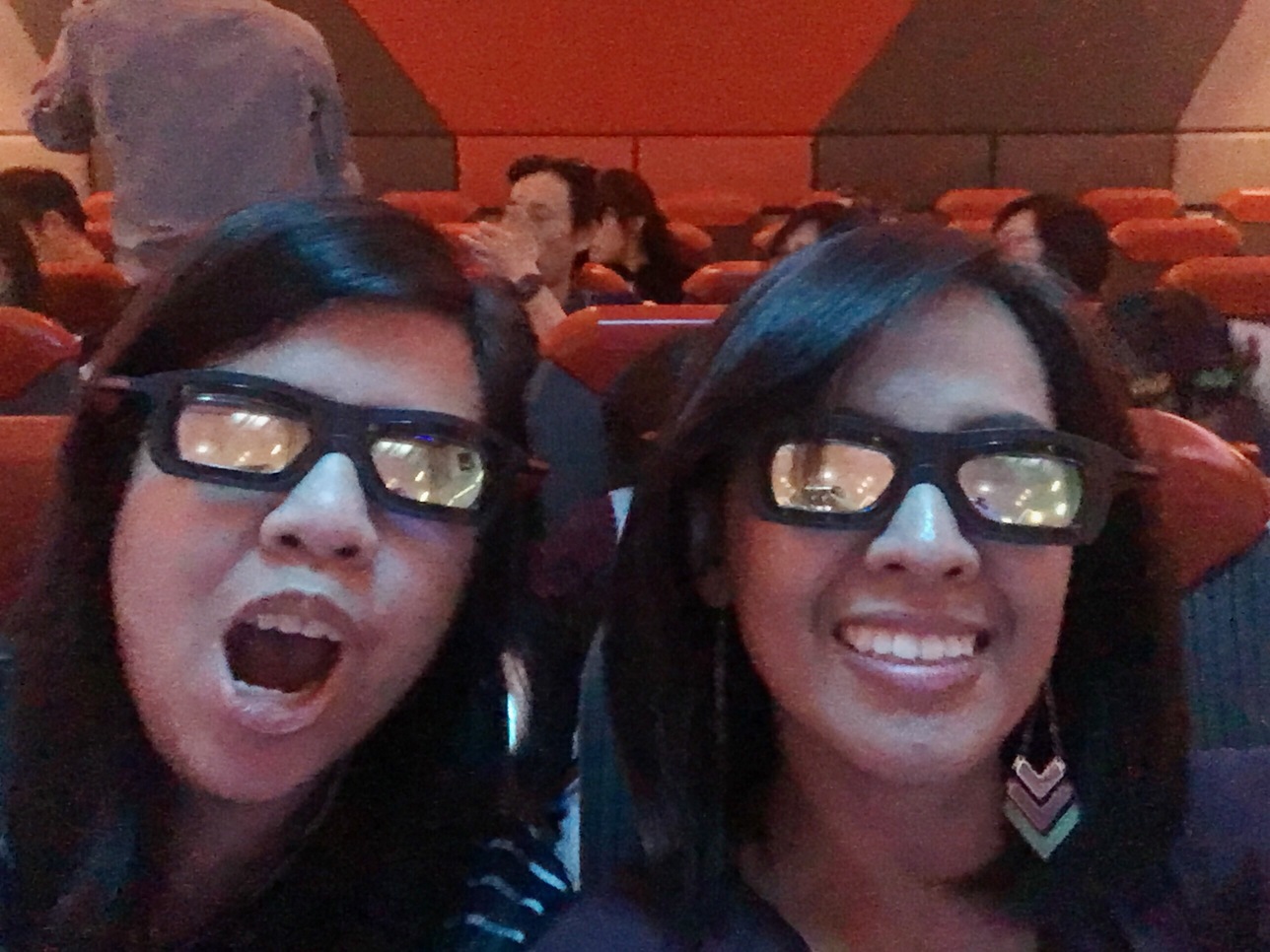 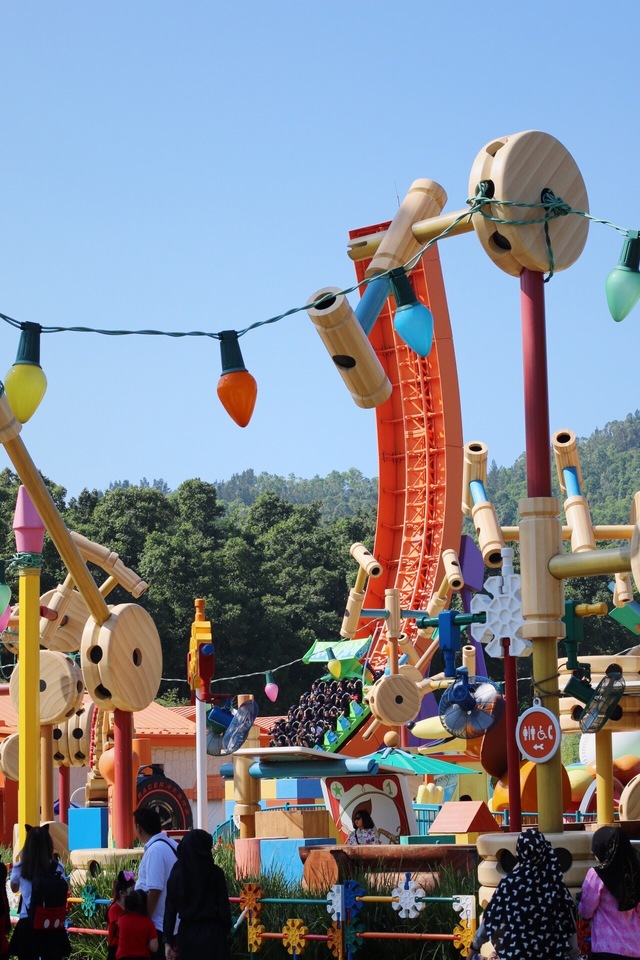 You’ll see most of them along Main Street, where we usually stayed to rest or wait for the next parade. It’s an added feature inside the park that makes you feel like you’re part of a community; a small town that is very welcoming. 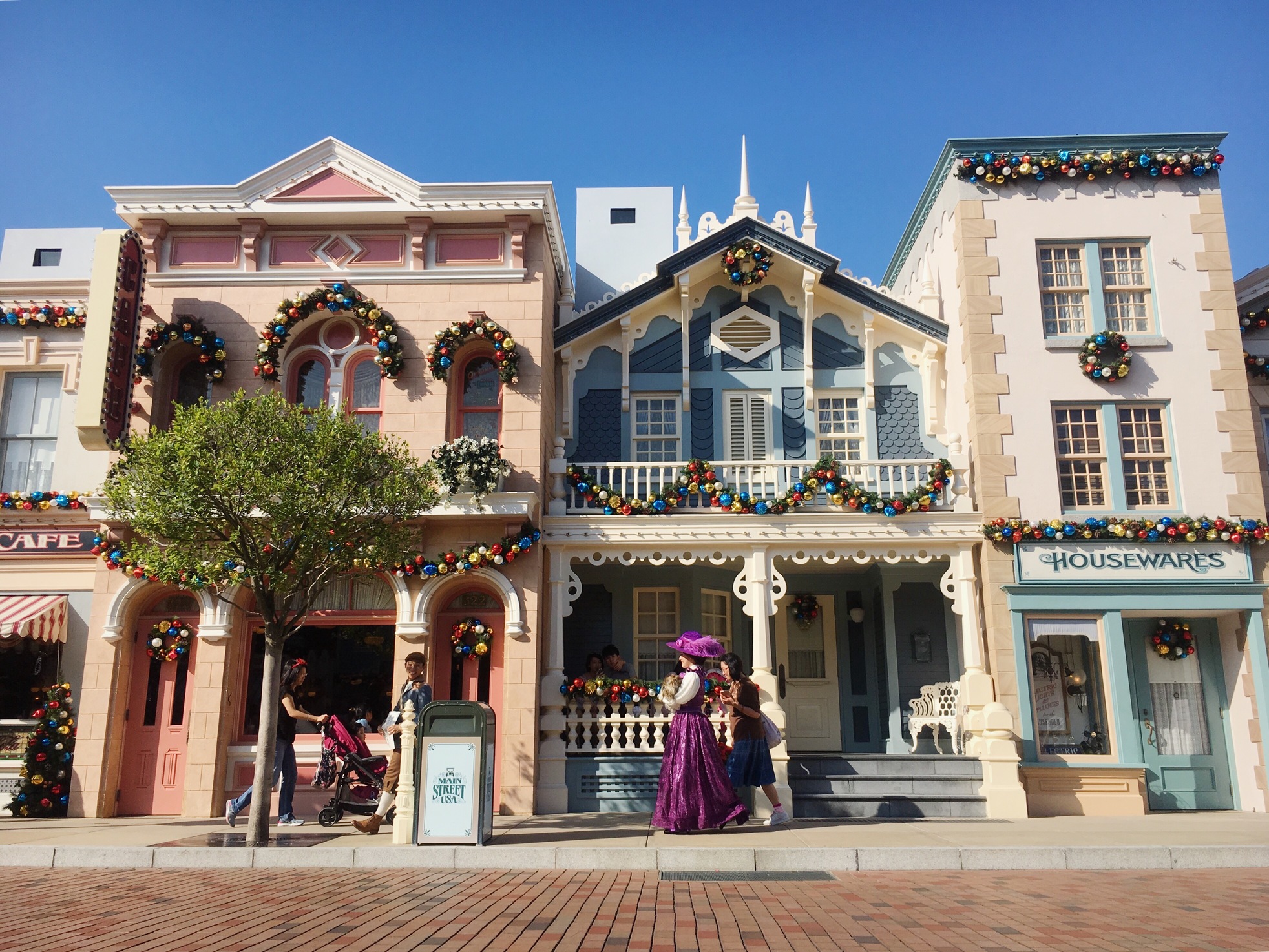 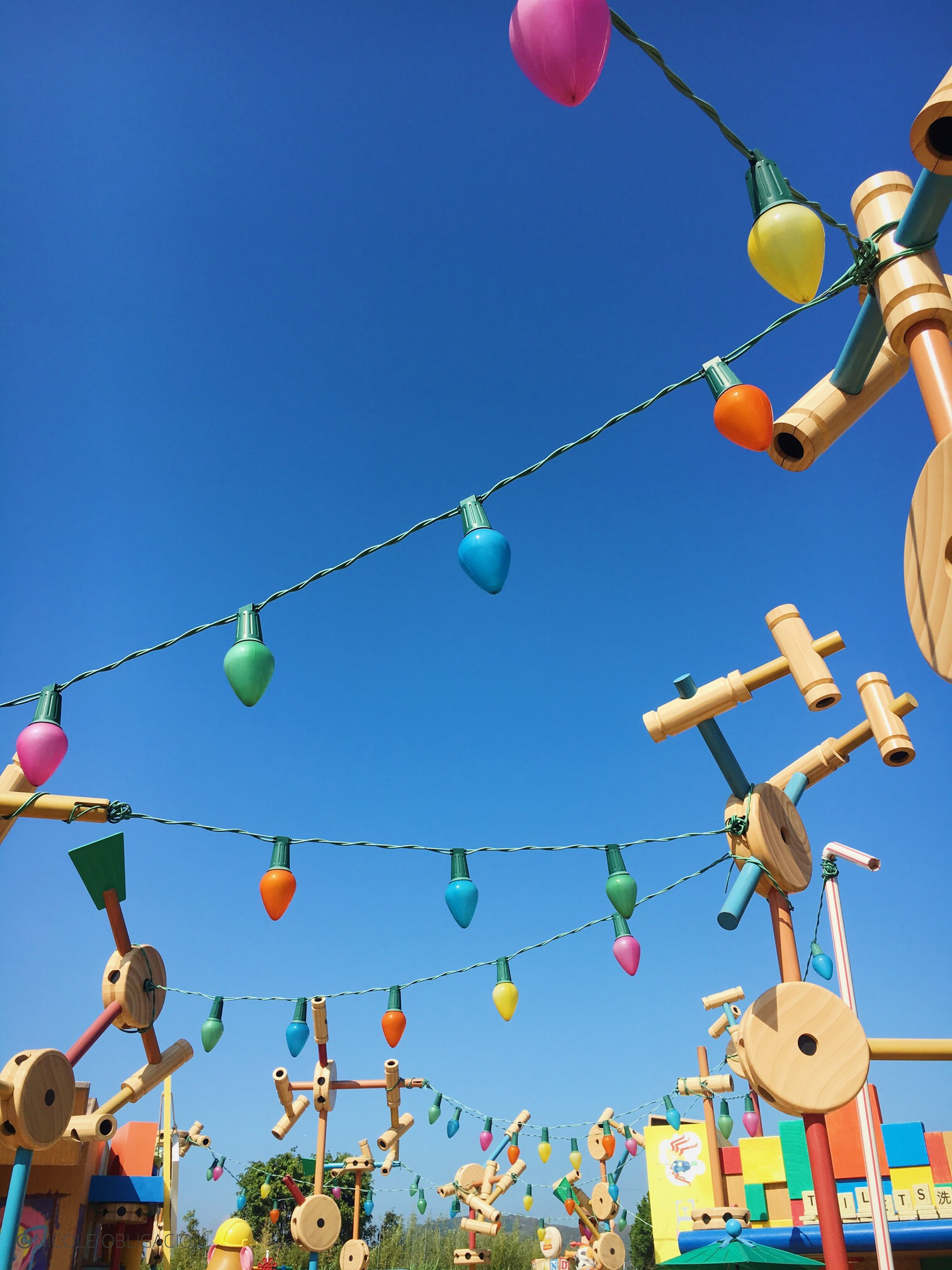 Near Main Street, some of the characters such as Mickey & Minnie, Chip & Dale, Donald & Daisy, and Goofy have their own stations where guests can line up to have their pictures taken with them. We chose to line up and wait for Mickey and Minnie under the scorching heat of the sun. After almost two hours, we finally had our photos taken. Can you believe it?? Hahaha. If you can’t afford to wait that long, I suggest that you take photos from afar instead and hope that the characters will be seen in the background. 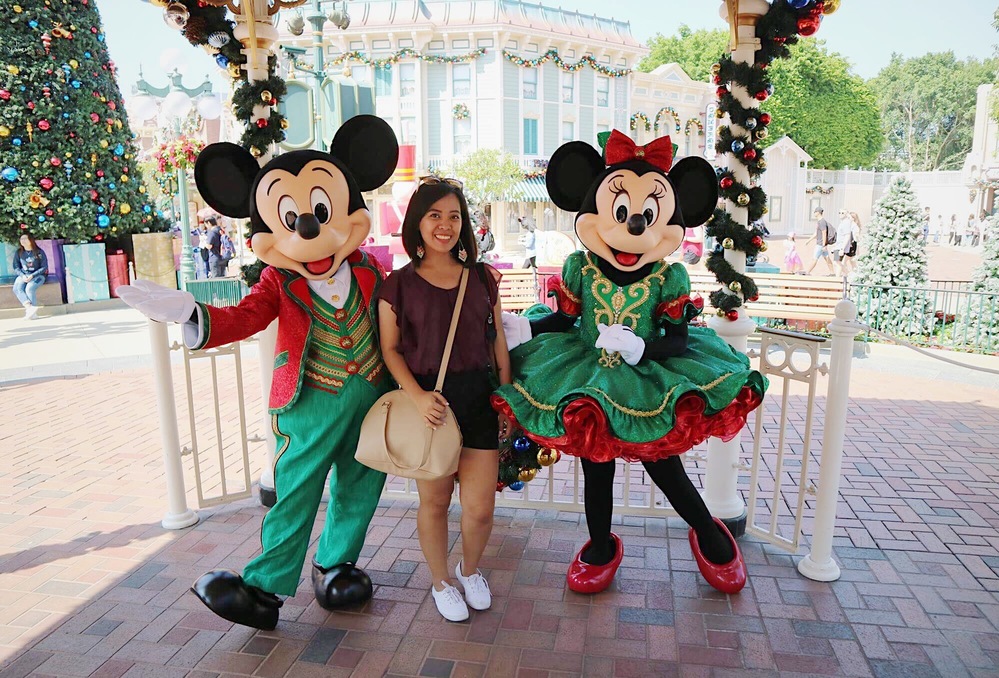 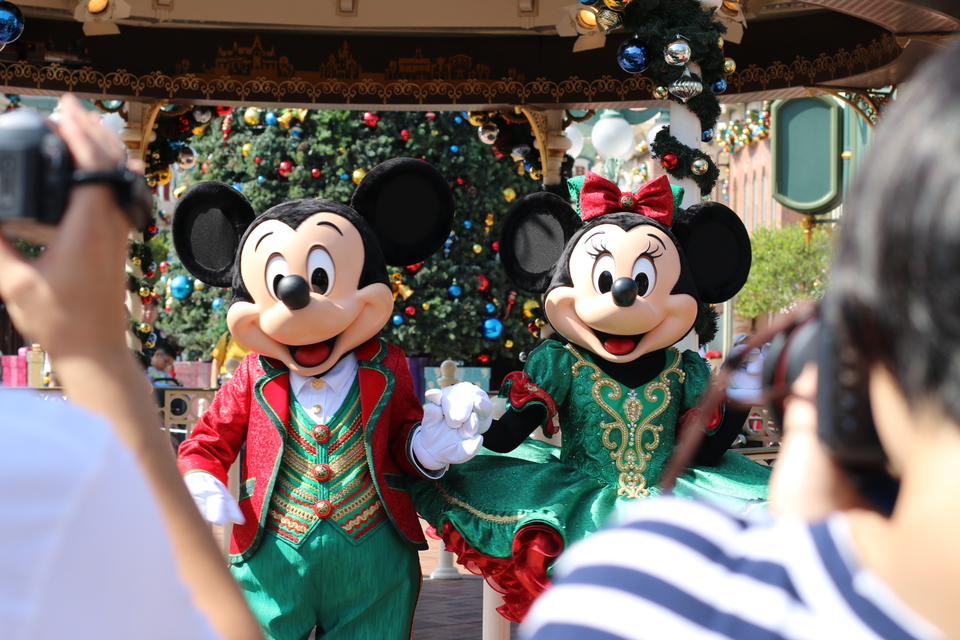 Tip: If you want to get a decent photo of yourself inside the train with no one in the background, I suggest that you ride the train from Sunny Bay to Disneyland Resort, wait for everyone to go down, let the doors close again, and take photos as you head back to Sunny Bay (where you came from). In short, you can do a roundtrip because that was what we did (unintentionally). Tadaaa! HAHAHA.

The train ride itself is a fun experience to start your adventure in Disneyland. You’ll love it! 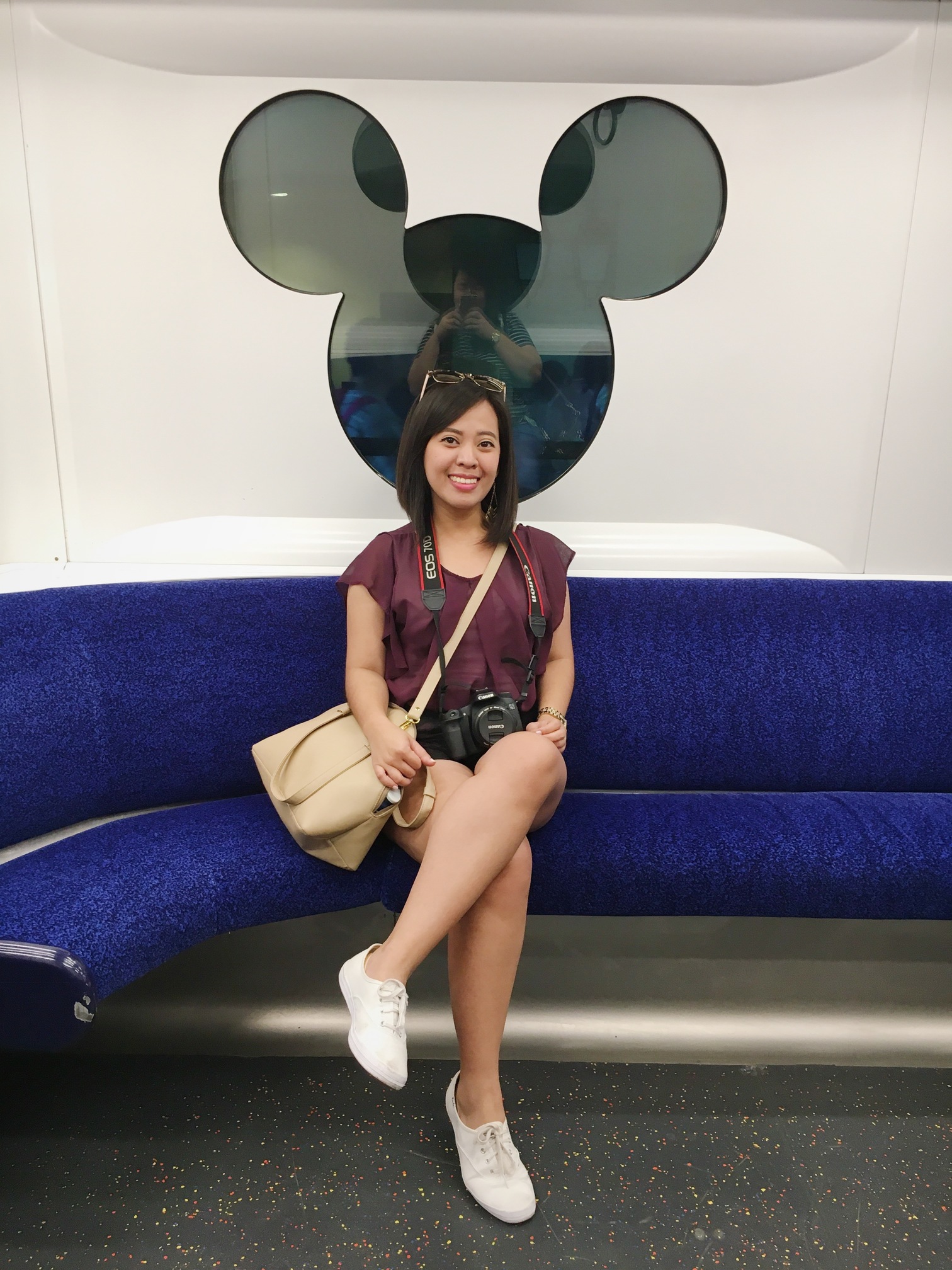 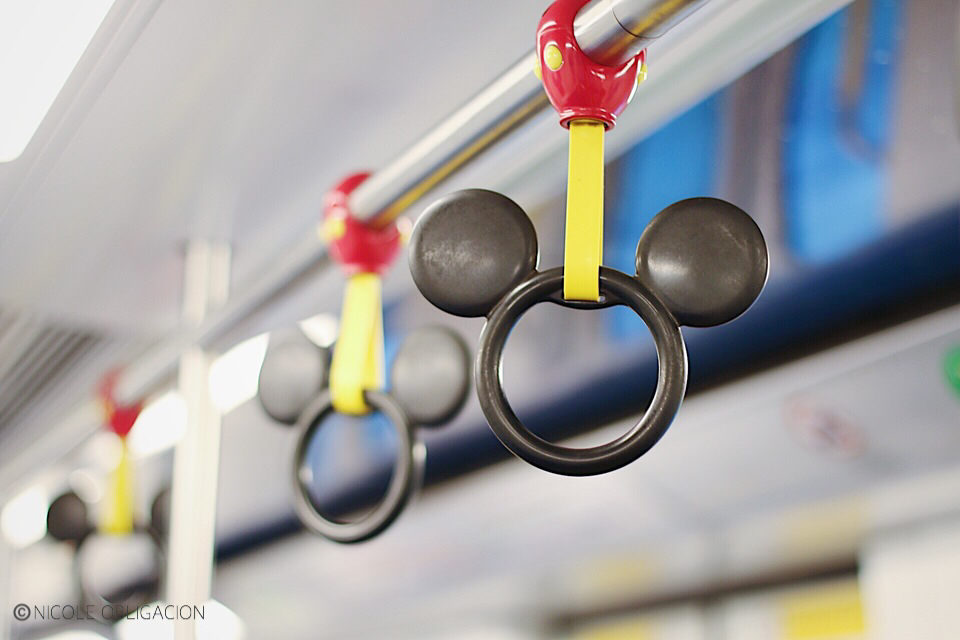 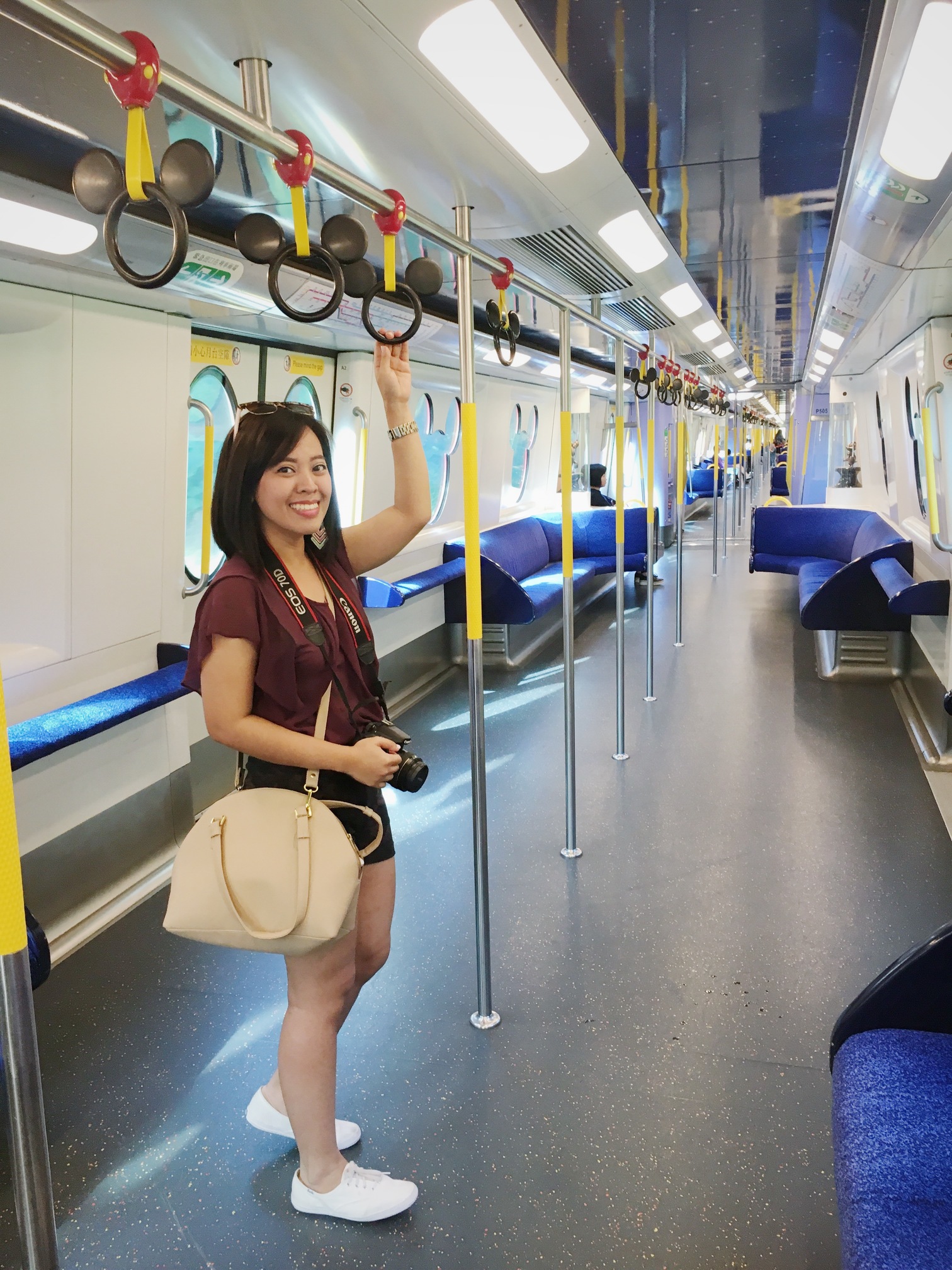 One of the things that I liked about the park is how they maintained their restrooms. We didn’t need to worry about using clean toilets because they were neat! They also had the necessary toiletries inside. Plus, the restrooms were air-conditioned! Very nice! 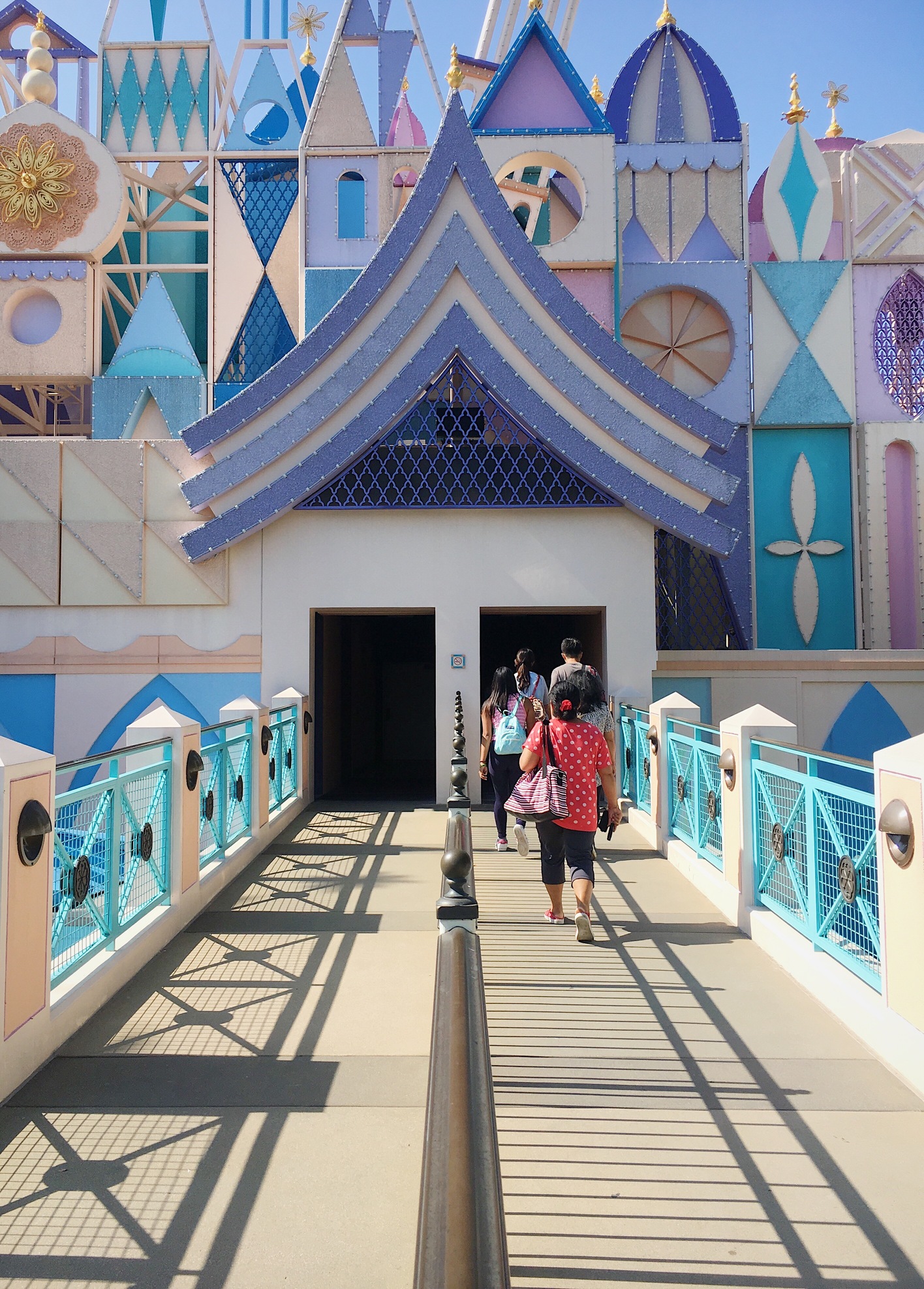 10. TRAIN RIDE INSIDE THE PARK

If in the middle of the day your feet get very tired but you still want to tour the attractions, the park offers a train ride around Disneyland! Yes, there is an outdoor railroad inside the park! We didn’t get to try it though, but it was a neat and hassle-free way to go from one area to another. 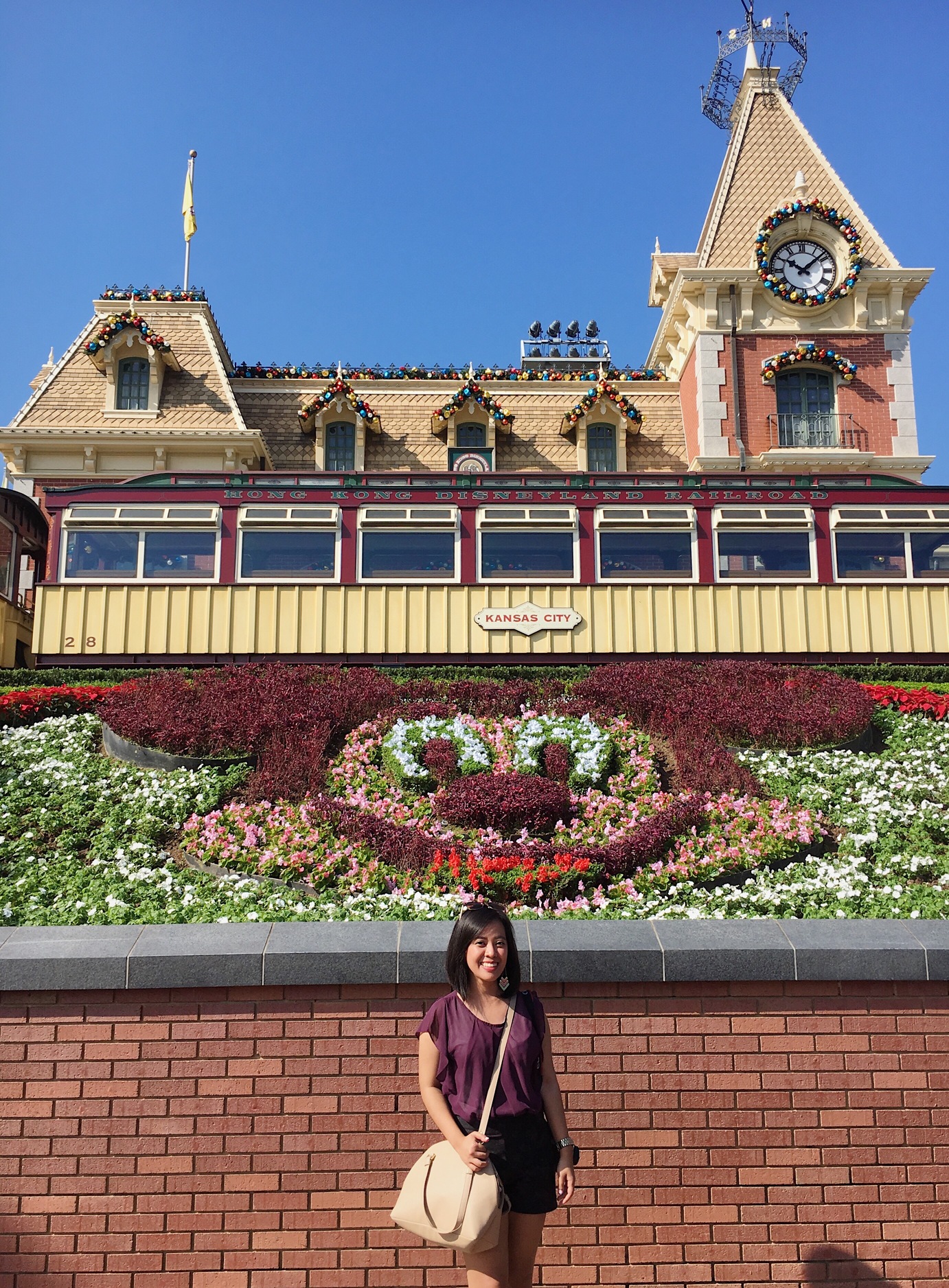 There are numerous kiosks all over the park and some shops along Main Street that sell souvenirs and other Disney merchandise. I wanted to buy a plain Mickey Mouse headband, but the only one that they were offering had a blue ribbon on it (HKD 180 / PHP 1,200). I decided to save the money for food instead. Hahaha! But, if you have extra cash, you might find some interesting Disney items there! 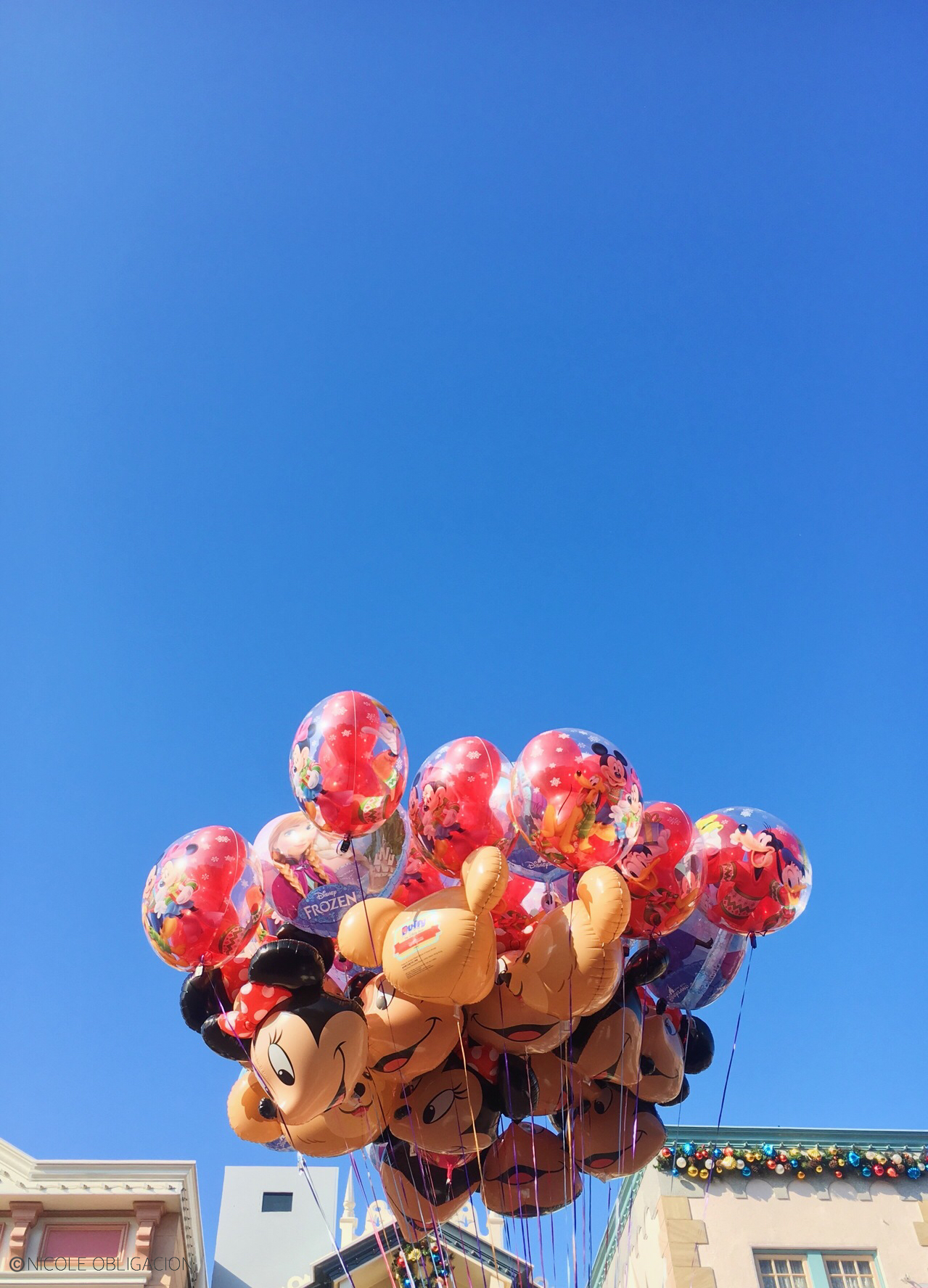 For the finale… “Disney in the Stars” fireworks show! We intentionally waited for hours before we watched the last attraction for the day. Thankfully, the weather was perfect, so they continued with the fireworks! (Note: Avoid going to Disney during the rainy season. They will cancel the fireworks part.)

It was a lovely 9-minute show of fireworks bursting to the medley of famous Disney tunes such as “Be Our Guest”, “Tale as Old as Time”, and many more. It was an amazing and heartwarming experience especially for a Disney fan! Do not, I repeat, DO NOT leave the park until you’ve finished this last part. You’ll probably feel like a zombie by 9 pm, but you’ve got to hang in there, wait, and witness it in person. Since it was nearing December, they also gave an extra effect along Main Street after the fireworks show. They provided fake snow to fall from the rooftops! Pretty cool! 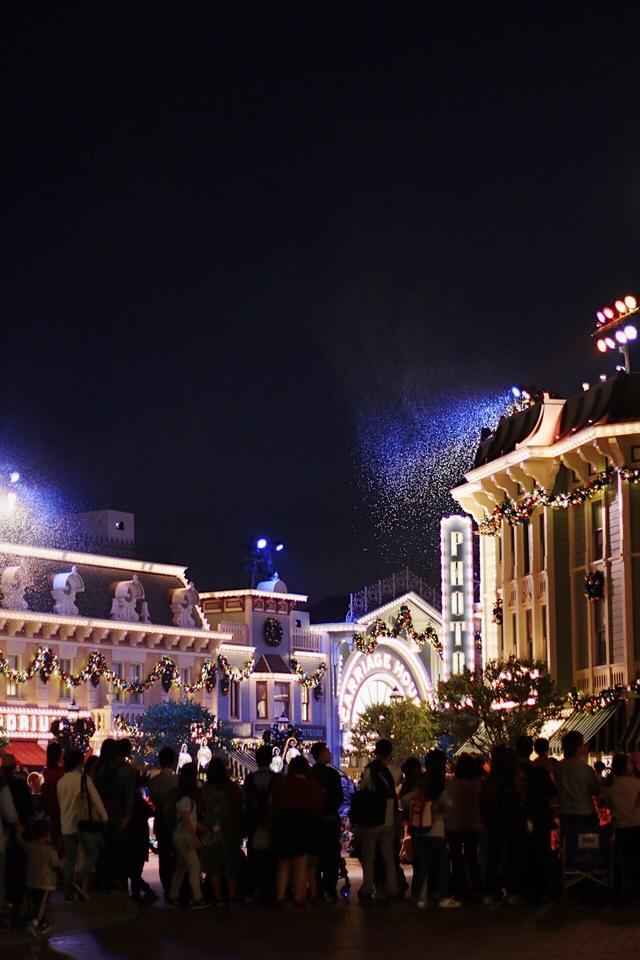 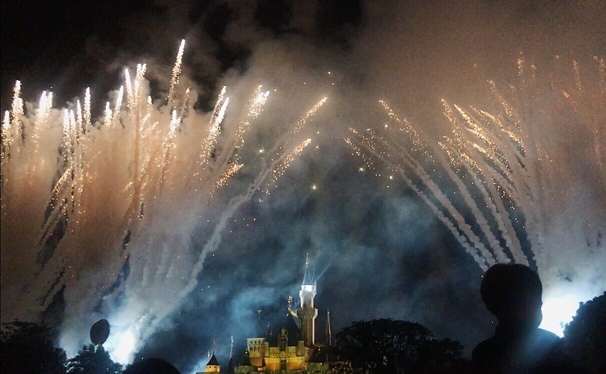 Hopefully, when you visit Hong Kong Disneyland, you’ll be able to re-live your childhood memories too or for those who will be encountering them for the first time, appreciate the excellence and passion that they’ve put into the whole experience! Until next time, Disneyland!

4 thoughts on “12 Things to Expect in Hong Kong Disneyland”